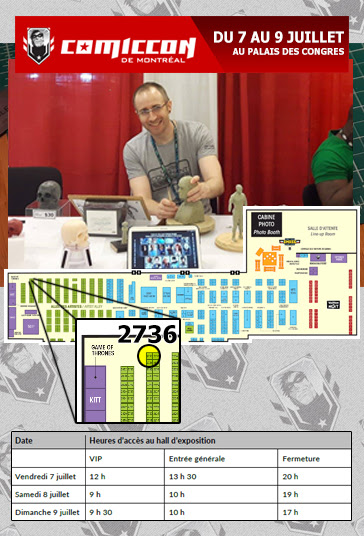 First stand at a convention. I choose Comic-con Montreal 2017. It was a great experience. I can definitely say I will do it again. I was there the three days from Friday to Sunday.

What a great week-end. I did met new friends and I was able to teach a bit about my art. I try to be original by selling Stressballs in Skull shapes. It was a succes, but I didnt plan it. 58 000 attendees and I did so little copies. It was a guess for me, so I'm happy it was not a failure. I could have produce too much and get stock with it.

So I did sell two size of skulls in 2 types of foam. A stressball like foam and a Larping type foam (more firm). I also offer 4 colors (red, blue, white, black) but all the red and blues got out on Friday and Saturday. By Sunday, only black and white remain. So I brought "fails" casting skulls: Those who did raise completely in the process. I was able to sell some, since it could be an accessory for a belt or a costume.

I also sold plastic skulls that came from an old purchase I did years old. And I sold few double-head clay tools.

Since, I couldnt have produce more during the weekend, by Sunday, the table start to be pretty empty. I decide to bring some old casteline sculpts to work a bit on those. Visually that bring a lot of people to my booth.

Be aware, that we plan to create a online shop for those who want skulls during the year. But we will be back next year.

In resume, I think originality sell more. I dont plan to sell fanart sculpt or something similar, Im too scare about to possible attack from the companies.

So next year, I took a 2 tables space (with a corner). That will offer me the space I need to split the stressballs and others produces from my main produce: Project StarNight. Im a creator of stories and I decide to start my own Sci-fi universe. I want to create shorts webepisodes, but I want to sell toys from my characters first. So a big portion of the booth will serve that purpose.

Plan to have a create backdrop and 2 big characters statues in display. But people will be able to buy smaller action figure version of them (1:9 in size so 8 inches height). two characters: a sci-fi knight and a regular Galactic soldier. Maybe I will have time to do a prototype of something else.

I really want to focus on that goal for next year, hoping that my stories will get followers. Stay tunes for more info.